For a hundred years the Speakeasy has been a place where people in the know gather for a cocktail. While it was most notably born during the prohibition of alcohol in the 1920s, today it tries to maintain that code of exclusivity. For me, it is a place to escape while my wife is shopping for the Holiday season.

I just can’t stand listening to ringing bells and Christmas music from November all the way through January. I definitely need an escape. So I slip away from all those ringing bells, people pushing and ready to run you down to get where they are going, just to get to where I want to go. Away, for a decadent Cocktail, in peace and quiet. So without further ado, here’s my four choices for the best Speakeasy bar in New York City. 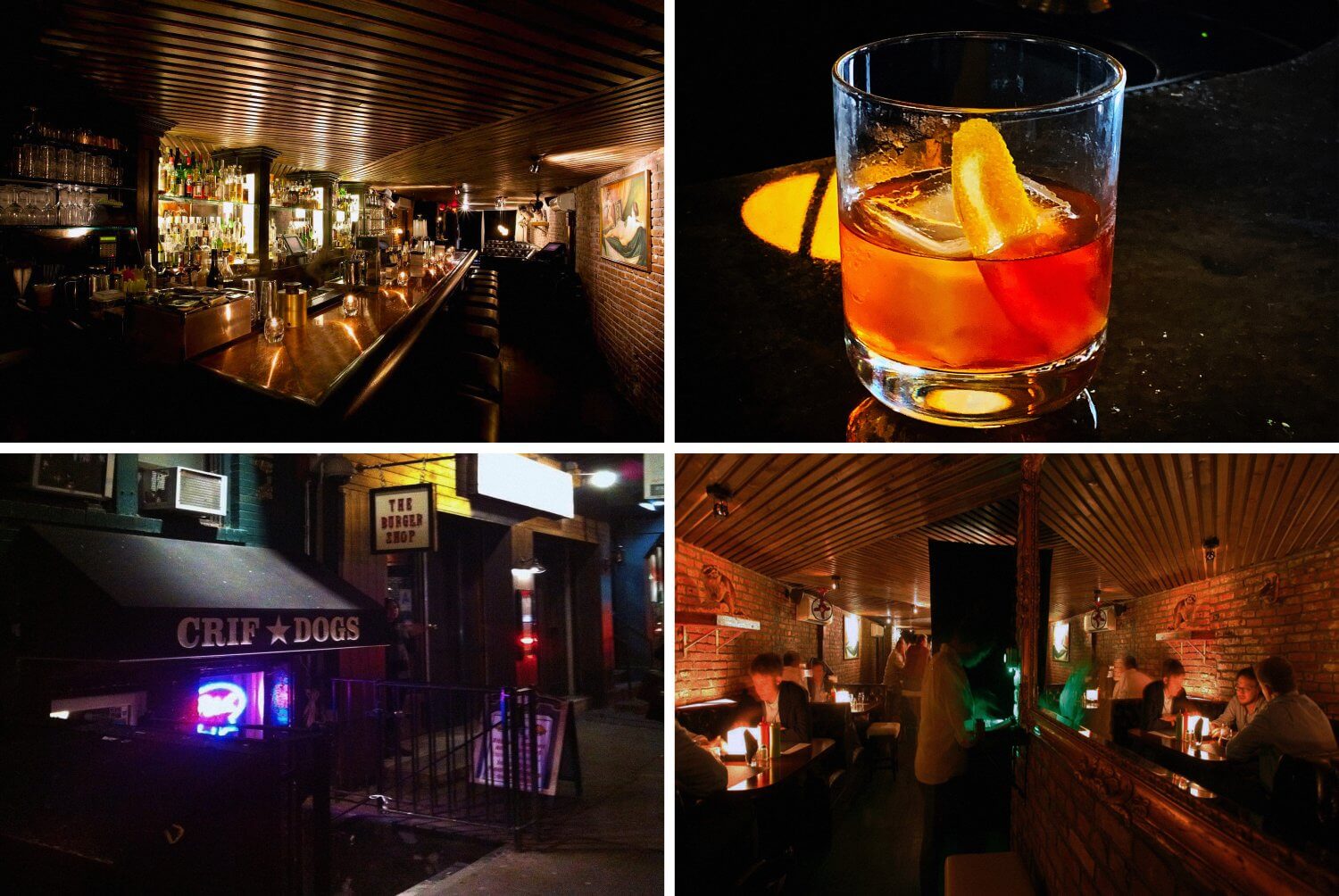 One of the coolest but probably also best known is PDT, short for Please Don’t Tell. However everyone knows. Just look for that great big 20’ hot dog floating outside the entrance on St. Mark’s Place in the East Village. And yes, it is a hot dog joint. While it may be odd to see a line out the door for a small hot dog space, that is just a front you have to go through to get into PDT. While you should make reservations first, good luck. As soon as the line opens it is busy. If you don’t know what a busy signal is, dial the number and its a flashback to the previous century before call waiting and voicemail. It simply means you cannot get through. So you step into the phone booth, pick up the phone and give your name. They will let you in when and if there is room. With only two bartenders working, it holds less than 50 people.

If you had ever gone there very late at night, you might have seen Anthony Bourdain or David Chang (or both) having drinks there some time back. Go there first thing on a Sunday evening and you could see Jack Fetterman, an Exotica music producer. While popular, it is an experience cooler than no other.

Filled with taxidermy, it’s a small space, but very quaint, quiet, and you can hold a conversation. Hungry? No problem, as long as you like gourmet hot dogs and tater tots. 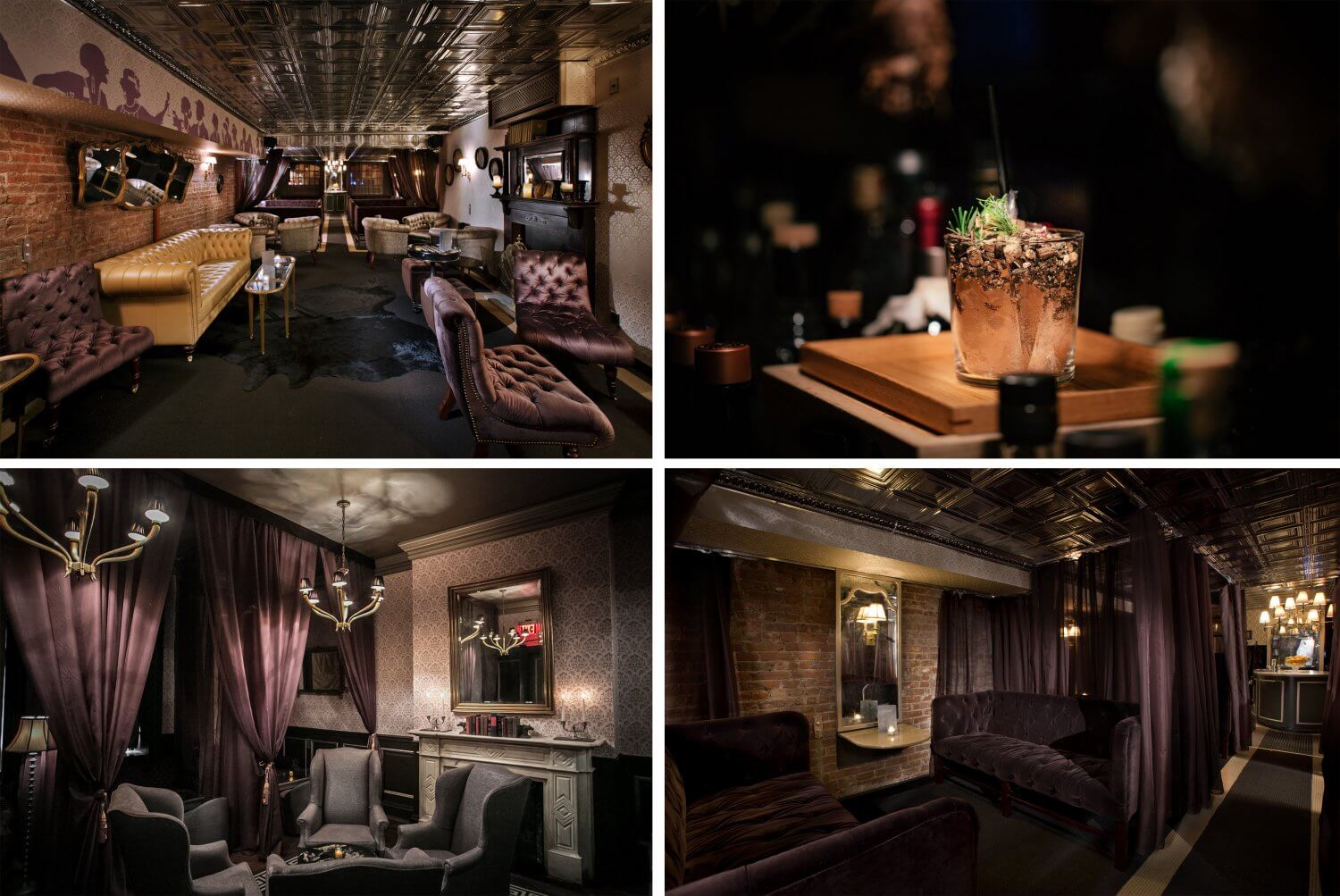 This is aptly named. In 1896 The New York State Legislature passed Raines Law, which restricted the sale of alcohol on Sundays. However, Manhattan hotels with at least 10 rooms were allowed to sell alcohol on Sunday accompanied by a meal or in hotel bedrooms. Numerous saloons proceeded to add small furnished rooms and applied for hotel licenses.

For the most authentic experience you need to visit Raines Law Room on 17th Street. Raines Law is an interesting one. It was a law that came about during Prohibition in which those from other countries could legally drink within any establishment such as a hotel which had 10 or more beds or rooms. Naturally, mattresses were brought in and nearly any covert space was now a hotel, especially since there were numerous immigrants in New York at that time.

As you walk downstairs, you have to ring a bell. Someone comes to the door and lets you know if they can accommodate you. Once inside you will notice its almost as quiet as a library. There are private booths and quiet areas with tables. Once you have looked over the extensive cocktail menu, you pull a cord or press the bell on the wall to call the waiter. The bring you the drink and won’t disturb you again until you silently and discreetly call for them again.

This is as close as you could get to a secret, discreet and private speakeasy a hundred years ago. The furniture and music match the mood and this is my favorite for all these reasons and more. 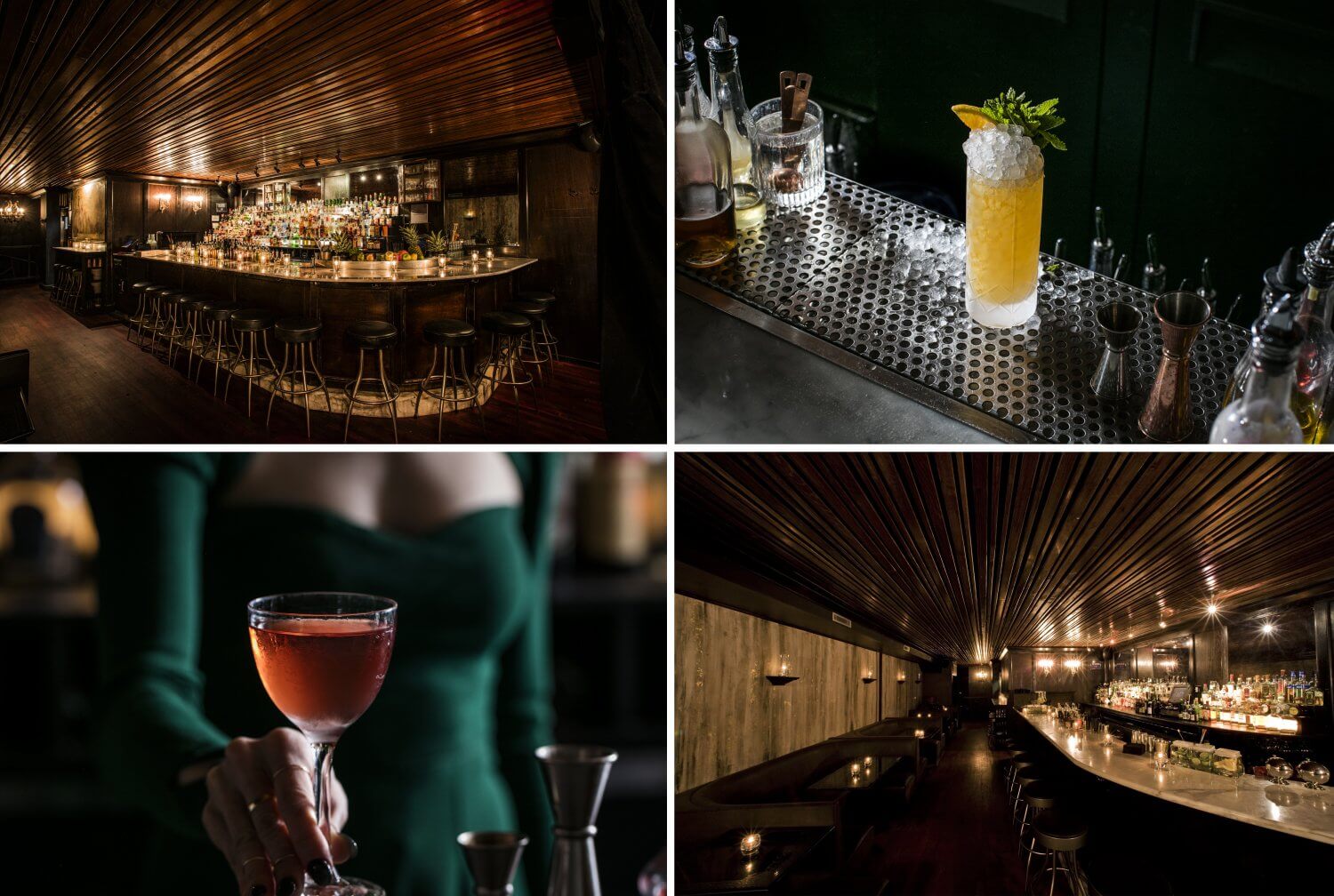 Pin it
Death & Co. — One of the most popular Speakeasies (Photos courtesy of Death & Co.)

Other than a doormat, you would never know where or what this place is. It is simply a wood panneld storefront with no windows.

Death & Co. A very popular spot on one of the most fun corners of the East Village, which includes Miss Lilly’s with rums than you can shake a stick at. Then there is Mother of Pearl has the best tiki drinks and Polynesian cocktails in Manhattan. But it is not always easy to get into Death & Co. Even though I am with a brand ambassador who seems to knows everyone, we still have to wait. So, we go a couple doors down to Amor y Amargo which probably could not hold more than a dozen people including the bartender. However, it is one of the best rated bars put together by a James Beard winner. They have a short list of some simple but killer cocktails, but the real attraction here is probably the largest collection of bitters and amaros you will find in any bar.

Back to Death & Co., our time slot has finally arrived. We take a walk where two men in suits check their iPads to see if we can come in. We enter and the place is packed, loud, and very dark. So dark in fact, that you will see a number of people holding the candles and the lights from their smart phones closer to the menu just to read it. It is pretty extensive, from shaken to stirred to tropical, etc. Maybe I came here on an off-night, but cocktails, shaken or stirred, should never have shards of ice floating in a coupe glass. After all, they do have a book on mixology which stresses the importance of double straining. For all the attention and hype this place has gotten, it is not my favorite, but it is still one that you should visit regardless of my experience. 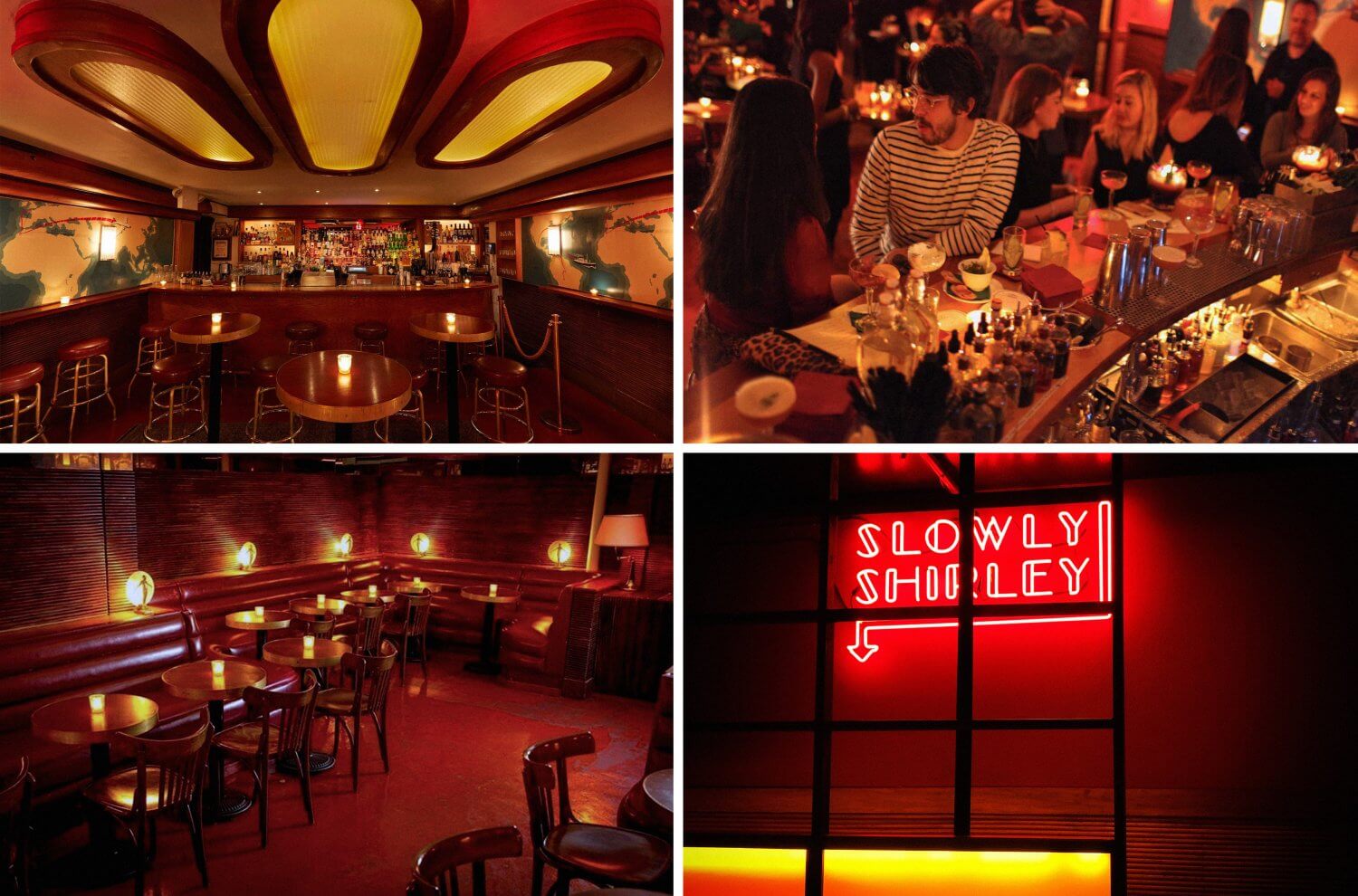 These days there are Speakeasies located within other bars. If you head down to the West Village of Manhattan, you go into The Happiest Hour which literally has a whole wall covered with artefacts from yesteryear. Bottles of Havana Club rum (the real brand, not the knock off brand from Puerto Rico), tiki mugs, old tourist maps, extinct brands of cocktail mixes from the 1970s, souvenirs and knick-knacks. At 6pm a bright red neon light goes on indicating the downstairs is open, but by invitation or reservation only. But don’t get too nostalgic, because once you are downstairs you will hear music from the late 1970s and early 1980s like “Get Down On It” by Kool and the Gang, and “Living for the Love” by The Isley Brothers. A mix of slow jazz, smooth jazz and funky pop. I honestly don’t hate it, but it does not match the mid-century decor.

This evening I am fortunate to be drinking with Mr Garret J. Richard with Mr Ray Sak behind the bar. Garret in spite of his youthful looks is a midcentury prodigy, even the elders like Beachbum Berry look at him with high praise. But Garret does not want Polynesian Pop tonight, he wants his go to gin cocktails. He asks Ray to stir up “Allies”, an incredible cocktail which uses Perry’s Tot from New York Distilling Co.

Being a Rat Pack fan myself, I ask him for Sammy Devil Junior, which is a cocktail based on the Rusty Nail, a favorite of the Rat Pack, however, this one is made with rum and Japanese whisky and served over a large single block of crystal clear ice in a double rocks glass. It is delicious. In fact, every cocktail I had there is fantastic. The menu is diverse and they even have more than one menu. But like all speakeasies, it gets crowded fast and the volume of crowd chatter make it hard to hold a conversation.

So for me, I am headed to the other Raines Law Room in midtown where I can get away from a noisy crowd and slip back into yesteryear in a simpler time when it is quiet, more intimate and quality cocktails still prevail. 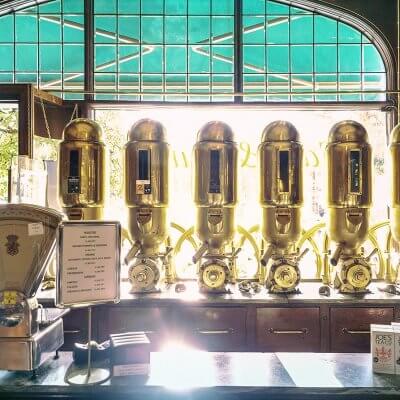 Largely unaltered since the 1930s with original details. 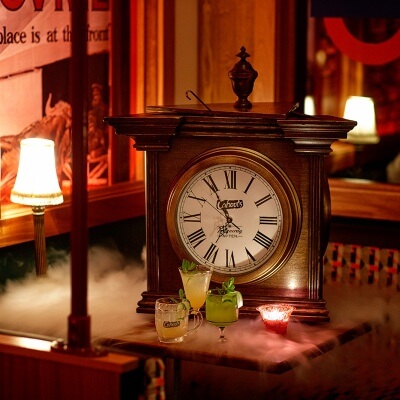 If you wondered what it would be like to party in a 1940s tube station, this is your lucky day. 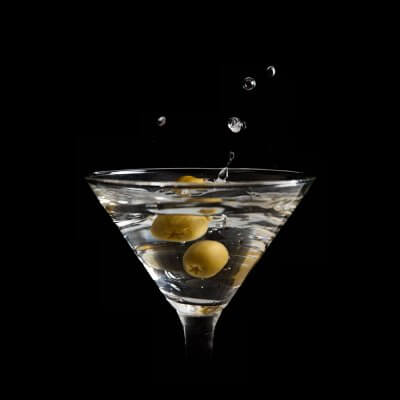 Music approved by James Bond. Best enjoyed with a Martini in hand. 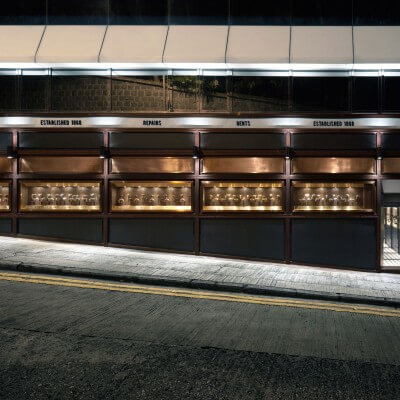